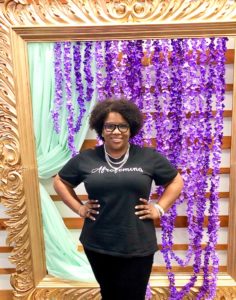 What defines me as Afro-Latina?  Is it because its an acceptable term, now? Is it the texture of my hair, because, I can just go to the “beauty supply”  and buy a hair follicle acid applicator… that would give me, “good hair”.  Is it the delicious platanos that I boil, mash with butter and eat with my salami, eggs and queso frito.  The go to dish for Dominicans when hunger strikes.  Or is it the language, the obligated alphabet my generations past to my Taino mothers and fathers were forced to learn, and stripped us of our authentic and God created selves. Could it be my rich melanin color that the sun nourishes while others says it’s rays give cancer. Hmm, have I been taught without a lesson to doubt my skin color. Could be another question to answer.

I’ve been in this journey of research and learning about my cultura and really what does it mean, ” I am Afro-Latina.

I’ve always identified myself as, “Dominicana”, born and raised in New York, proud as I can be. For some, saying, “I’m Dominican”, would argue that I am not genuinely Dominican.  Technically it makes sense, since I was born in North America.  Technically, an American.  But in this case, I am talking culturally, traditionally, and spiritually. Yo Soy Dominicana.  I was taught to be proud and nothing less.  So when someone called me something other than… it was like you cut your eyes on me and you shoved my head asking me to fight. Until, I learned that there’s actually more to just calling myself Dominicana.

I am Afro-Latina because, that’s the more recognized term.  I am ok with it, if it catches your attention to converse about the matters of social justice, women issues, and gets a momentum going to talk about topics that effect individuals that consider themselves Spanish speaker.  Then yeah, I’m all for it.  In reality, Soy Afro-Mujer, Afro-Quisqueyana. Soy Africana, de la Isla Quisqueya where my Taino roots began.  The beautiful Islands of the Carribean were colonized by the Spainards.  Again, Im in a journey of learning and discovering.

So, what defines me as an Afro-Latina. It means that I understand that my roots run deeper that the land I was born in.  That my blood comes from the lands of Africa, mixed with the Island of Quesqueya.  That many aimed to dilute with their fantasies, greed and spreadable poisonous power to destroy who my seeds were created to be.  It means, I carry Taino blood, music, culture, traditions and beliefs that have been developed over time by my ancestors.

At the end of each day… Soy Mujer, en una aventura de aprender de donde soy, pero si estoy segura de quien soy.  I am woman, in an adventure to learn where I am from but, one thing I am sure is I know whose I am. I am God’s creation living in a art canvas on earth.